The Gulf of Mexico Dead Zone

You are here: Home / KSB Blog / The Gulf of Mexico Dead Zone 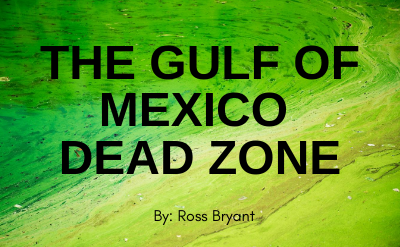 The Gulf of Mexico Dead Zone

In a previous blog post, I discussed some of the negative results of monocultures. You can read that, here. In this reading, I wanted to further expand on a specific issue I had only briefly mentioned previously. Monocultures bring issues to their local environment, but those don’t stop at the farm. This Water Quality Month, I wanted to bring awareness to The Dead Zone, one of the most severe repercussions of monoculture. The term itself probably is a giveaway about what exactly it means. But how exactly is The Dead Zone established?

To even begin discussing the Dead Zone, we have to go further back. Allow me to just lightly touch on monocultures again. Previously I had mentioned that the runoff from monoculture farms is toxic, containing chemicals that are good for plant growth, but overall bad for the environment, stemming from herbicide and pesticides, as well as fertilizer runoff. Well, let’s start there, on the farm where there’s hundreds of acres of vegetation and life being cultivated.

We use these herbicides, pesticides, and fertilizers to help stimulate positive growth on the farm. The problem doesn’t lie in using these chemicals, although you could certainly have a whole debate about organic crops versus GMOs (genetically modified organisms). But you see, these chemicals in the water will run off into our creeks, rivers, and streams. On the way, some of these chemicals will degrade the water quality and end their journey somewhere along the river banks. More specifically, the chemicals I’m talking about are nitrogen and phosphorus.

Now, normally, these chemicals being in the environment isn’t that big of an issue, as the chemicals are typically depleted in the soil. But when it’s so concentrated like how it is on a monoculture farm, the chemicals create anthropogenic issues for environments that aren’t being monitored and maintained. This is where things start to grow out of hand.

When these anthropogenic chemical inputs have been placed into our waterways, it does the same thing as it did before, which is promoting plant growth. Which sounds great until the plants start to overgrow and no one is keeping them in check. This is a very basic explanation of how algal blooms occur. Algal blooms are dense layers of gross (and stinky…) algae that make the water toxic to humans and fish. The process of excessive nutrients, frequently due to runoff from land, causing algal blooms killing marine life is called eutrophication. 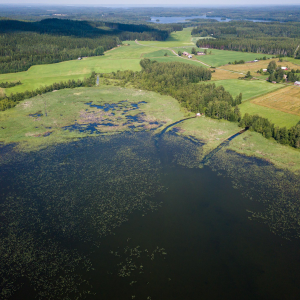 Eutrophication not only creates harmful algal blooms that make our water toxic, but it also blocks off any sunlight that would penetrate through to lower layers of the water. Now oxygen-making plants can’t photosynthesize due to the lack of sunlight, which the fish and other marine species still need. So they die there, as the highly productive algae does it’s magic. But what’s even worse is, the bacteria that decomposes these organisms ALSO uses oxygen. So any remaining fish that were resilient enough to survive in the water despite the low oxygen levels have to fight for the few remaining fish in order to survive in an oxygen deprived environment. The algal blooms suffocate the environment, and are highly productive due to the chemical run off we’ve introduced into the waterways. Now, the only thing that’s left to survive in this environment is the algae and the bacteria that decomposes life. This is a dead zone.

Okay, sure, this may happen here or there, but surely one might think that these chemicals dissipate, or aren’t as big of a deal when they aren’t heavily concentrated. They would be right. But what happens when all of this material IS concentrated. Many of those big agricultural operations up north that help to contribute to these algal blooms have something even greater in common than their monocrops. Their collective runoff can be traced down the Mississippi River, and that exits out to the Gulf of Mexico. Earlier in this post, you may have noticed that I had said “The Dead Zone”, not a dead zone. With all of the factors we’ve discussed previously, it shouldn’t be all surprising that these chemicals can lead to one super eutrophication event, or as it’s more commonly called, The Dead Zone, found at the Gulf of Mexico.

The Dead Zone is a tragic tale of unintentional consequence. As monoculture operations continue to be cultivated, other parts of the country are degraded due to the runoff. This doesn’t just stop at affecting marine life, because we as humans, especially on the coasts, need to learn to live in harmony with our oceans. Because the fish are dying in the Gulf of Mexico, the fishing industry has to travel farther and farther out in order to catch the fish we enjoy. But that comes at a cost, as well. We have to spend more and more on fuel in order to make these fishing trips happen. It’s unsustainable.

Well, it’s true, we aren’t these big farming operations that contribute to eutrophication, but what we can do is make small adjustments in our daily lives so we aren’t contributing to the dead zone in our local community. You can start by:

Cleaning up after your pets when you let them out for exercise.

Research the topic more so you can have a better understanding for yourself.

Ross is an Environmental Studies and Public Relations Dual Major at Berry College. Ross is a Bonner Scholar at Berry College, and also volunteers for Keep Rome Floyd Beautiful up in Rome, Georgia. Ross recycles cardboard and plastic in order to help be actively sustainable, as well as reuse shopping bags. For the Summer of 2020, follow Ross in his studies in order to become more conscious of sustainable practices.